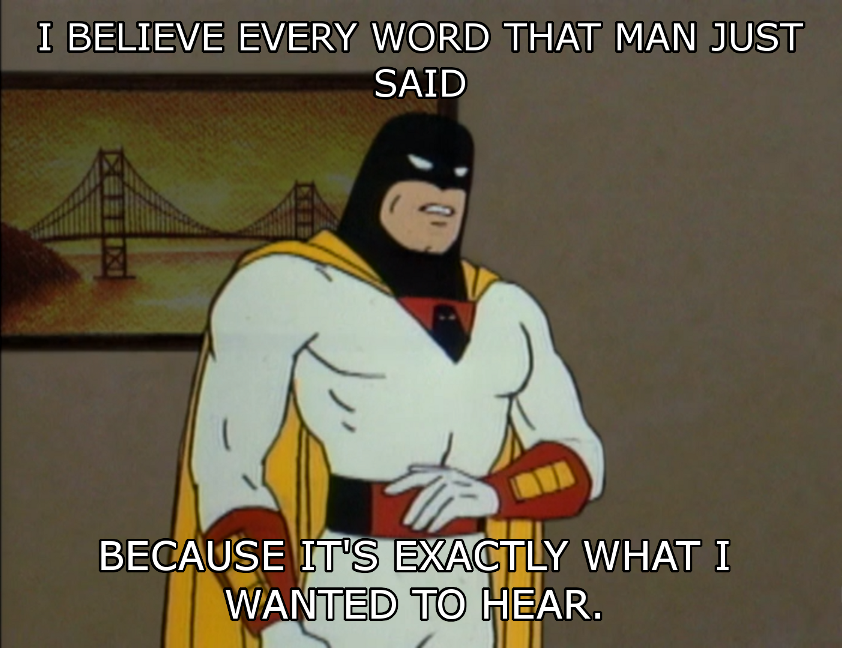 More and more I’ve been thinking recently that pieces of information can be scored according to these three categories… a claim can be placed somewhere on the scale that runs between desirable and undesirable, between true and untrue, and between useful and useless.

And these three aspects must not be confused.

For instance, telling a child that a monster will come and take them away if they don’t clean their room may rank as highly useful, but it is both untrue and undesirable (we don’t actually wish that monsters existed and had free reign to abduct messy kids).

Similarly, telling the child “I before E except after C” could be useful for teaching rudimentary spelling and simple words, and although this would be convenient rule to follow, it is not actually true once they advance to an elementary-school-level vocabulary (just 44 words in the English language obey the rule while at least 923 break it).

As another example, telling the child that a deity watches over them every day and loves them may be a desirable situation (don’t we all want to be loved and cared for?), but that does not have any bearing on the usefulness or truth of the statement. It may actually be much more useful to tell the child that when they are mean to someone they need to make it right with the person, not with a god. It may be more useful for the child to value their relationships with family and classmates over their relationship with an imaginary friend. It may plant the seed of a more productive member of society for the child not to believe that abusive people will face consequences after death, but that preventing them from preying on the weak is something we should strive for in this life.

Our president and his administration have chosen to define “fact” as those things that are desirable or useful to them, and unceasingly ignore or attack information that is true and accurate. This is the hallmark of liars, narcissists, abusers, and dictators.

Don’t get me wrong: desirable claims may sometimes have their own sort of usefulness, regardless of reality or practicality. One might call these “placebo” claims, or “fake it til you make it” claims, which carry out some desirable function simply because they are themselves desirable. But if we prefer reality to delusion, this is the lowest form of value we should ascribe to any statement—if we create a value scale for examining statements, desirableness is worth, say, one point.

Useful statements can also be powerful: if my car is low on wiper fluid, has a broken tail light, needs some air in the tires, and the engine was stolen, when the tow guy comes up and asks me “What’s wrong with it?” the correct answer—although true—is not “A lot of things.” The information that will get the most done in this situation is that THERE’S NO ENGINE. Say we give usefulness a value of three points.

However, if we appreciate reality and honesty over fantasy and deceit, we must give the most value—five points on our arbitrary valuation scale—to those claims which are true: statements that agree from every angle of detailed inspection with the physical, historical, calculable reality of our world. This is not snap judgments, it is not first glances, it is not laymen’s terms, and it is certainly not common sense (see my essay on the dangers of “common sense”). It is persistent, continuous, meticulous inspection from individuals dedicated to discovering the facts, regardless of usefulness or desirability.

Truth is hard. It goes against instincts and wishes, it goes against appearances and assumptions, it rarely fits a billboard, tweet, or news chyron. Sometimes you can express the idea in a form that is useful but also mostly true (they say education is the process of telling smaller and smaller lies), but the greatest information of all is that which is true AND useful AND desirable. This is a rare discovery indeed.

From that perspective it can be seen that desirability is really just icing on the cake and must be ready for sacrifice the moment self-satisfaction gets in the way of real accomplishment or illumination. Usefulness is much harder to sideline, and sometimes even usefulness plus desirability can come pretty close to trumping truth. But in my experience these are almost exclusively in sensitive social situations because we deal in words and emotions and expression and relationships and culture and art and history… I think the typical mundane example is, “Does this dress make me look fat?” but it is not hard to find more substantive instances where a straightforward answer may do more harm than good (consider: “A meteor the size of Africa came out of nowhere and will impact the earth in an hour wiping out all life instantly without warning” is a true statement—would it be more merciful to let everyone end their lives in peace, or expose them to hysteria, fear, sadness, etc. since there is nothing to be done about it?).

But truth is what put foot prints on the moon. Truth is what eradicated polio from the United States. Observation, calculation, doubt, verification, exploration, evidence. The hard work of discovering the mechanisms of our physical, social, political, cosmological, quark-riddled universe uncovers the truth of reality from which all practical information is distilled. Truth is behind every major social improvement, medical breakthrough, and scientific discovery throughout human history, and must be the grounds upon which all legislative efforts are based. Applying the label “fake news” to dogged inquiry and tireless investigation while sharing on social media the latest David Avocado Wolfe nonsense is exactly the same as lying. It is adding your feet to the masses already trampling out the fires progress and opportunity.

If we each closely examine the things that we hold to be true, we will doubtless uncover many ideas that we cling to because we wish them to be true, or because we feel they will get something done. The hard task is to admit when these do not also match the reality of our existence.

And so these three remain: desire, use, and truth. But the greatest of these is truth.